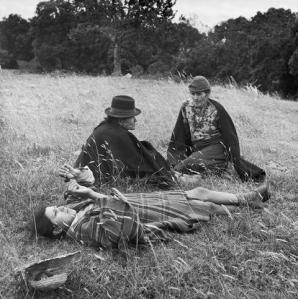 For decades Wendy Ewald has collaborated in art projects with children, families, women, and teachers in Labrador, Colombia, India, South Africa, Saudi Arabia, Holland, Mexico, and the United States. Starting as documentary investigations of places and communities, Ewald’s projects probe questions of identity and cultural differences. In her work with children she encourages them to use cameras to record themselves, their families, and their communities, and to articulate their fantasies and dreams. Ewald herself often makes photographs within the communities she works with and has the children mark or write on her negatives, thereby challenging the concept of who actually makes an image, who is the photographer, who the subject, who is the observer and who the observed. In blurring the distinction of individual authorship and throwing into doubt the artist’s intentions, power, and identity, Ewald creates opportunities to look at the meaning and use of photographic images in our lives with fresh perceptions.

Wendy Ewald has received many honors, including a MacArthur Fellowship and grants from the National Endowment for the Arts, The Andy Warhol Foundation, and the Fulbright Commission. She was also a senior fellow at the Vera List Center for Art and Politics at the New School from 2000-2002. She has had solo exhibitions at the International Center of Photography in New York, the Center for Creative Photography in Tucson, the George Eastman House in Rochester, Nederlands Foto Institute in Rotterdam, the Fotomuseum in Wintherthur, Switzerland, and the Corcoran Gallery of American Art among others. Her work was included in the 1997 Whitney Biennial. She has published ten books, her fifth, a retrospective documenting her projects entitled Secret Games, was published by Scalo in 2000. Two books on recent projects were published in 2005. A third, “To The Promised land” was published in 2006 to accompany an outdoor installation in Margate, England commissioned by ArtAngel. She is an artist in residence at the John Hope Franklin Center and senior research associate at the Center for Documentary Studies at Duke University. She is also currently teaching at Amherst College.

She is represented by the Yossi Milo Gallery.

I Dreamed I Had a Girl in My Pocket: The Story of an Indian Village, New York, Center for Documentary Studies and W.W. Norton, 1996.

Portraits and Dreams: Photographs and Stories by Children of the Appalachians, New York: Writers and Readers Publications Inc., 1985. (out of print)

Appalachia: A Self-Portrait, Frankfort, KY: Gnomon Press for Appalshop, 1979. (out of print)

Hyde, Katherine. “Portraits and Collaborations: A Reflection on the Work of Wendy Ewald.” Visual Studies, Vol 20 no 2, 2005.

Kurtz, Michelle. “Pictures Worth a Magazine of Words.” Raleigh News and Observer, 27 November 1997: 4B.

Wade-Hall, Elizabeth. “Photography Project No Shot in the Dark.” Durham Herald-Sun, 8 August 1994: B1.